My Sunshine – Chapter 1: You Have Shattered

Guess who managed to make the movie night prompt into a cheesy six chapter hurt/comfort song-heavy fic? This gal! ;>

Props to those of you who know what film I’m referencing in the first illustration. This is actually a fic I was working on that I realized matched one of the themes, so most of it is written.

Chapter One: You Have Shattered

Time stands still as it happens.

They’re on a routine call, it sounds like a fairly weak ghost, so only two of them go. Besides, it was movie night, and no sense ruining the night of every Ghostbuster (even if they’d been partway through the movie already). Holtz scream sings whatever song is on the radio during the drive over and Erin is fiddling with her hair and biting her lip between joining in. They’ve been at this for a year now, so two sounds like plenty for one weak little ghost. Except it’s not one weak little ghost, it’s one very powerful one. Holtz thinks they can still handle it, Erin isn’t so sure.

Erin is right to be unsure.

The ghost ends up out in front of a museum, they have it in the proton streams.  They think this is becoming easier, or they’re just getting better at this whole ghostbusting thing.  Erin is smiling and Holtz is laughing, until they suddenly aren’t.

Time seems to stand still as Holtz watches a spectral hand grab Erin and throw her into the glass panels at the museum’s entrance.

There’s a sickening crash as the glass shatters around Erin.

All the air leaves Holtz’ lungs, she’s screaming, but she doesn’t hear it over the rush of blood to her ears.  She bounds towards Erin, she has to get to Erin, but she’s slammed into from the side by the ghost before she can get to her.  Her vision turns red.

She isn’t sure how, but she bodily tackles the ghost to the ground.  She has it pinned and deploys the guns from the side of her pack and shoves them directly ghost’s godforsaken mouth, pulling the triggers.  The explosion she creates sends her flying.

Erin.  She has to get to Erin.

Holtz opens her eyes.  Blood and ectoplasm blur her vision, but she can see the ghost is gone and she can see Erin’s body crumpled in the ruins of the windows.  She manages to get up and clear her eyes enough to see.  When she gets close enough to Erin, she wishes she couldn’t see.

Her body is a twisted and mangled through a sea of glass.  Holtz chokes back a sob.  There’s too many injuries to take in; too much blood; too many limbs in directions they shouldn’t bend.

“Erin,” Holtz whispers, so afraid there’ll be no reply.

Holtz doesn’t hesitate, she pulls Erin up into her arms, keeping her as level as possible.  She knows she shouldn’t.  She knows about spinal injuries and head trauma and broken bones.  She knows she should call an ambulance and wait.  She panics because it’s Erin and she’s hurt and this is all Holtz’ fault.  She carries Erin back to the Ecto-1.5 instead and straps her down into the back seat.

She doesn’t know how, but they get to an emergency room.

“Please!  You have to-! I can’t-! She’s my-!”  Holtz is gasping as she’s carrying Erin into the hospital in her arms.  Doctors and nurses take Erin from her and wheel her away on a bed.  Holtz panics. They say something about needing to stitch that cut in her forehead and pull out all the glass in her arms, but she fights them off, she has to stay with Erin- she just has to. They ask her what happened, Holtz explains as best she can: ghost, window, all her fault.

They get her to sit down.  They have to take Erin away to fix her, and Holtz needs to get that glass out and all those cuts stitched.  Holtz can’t hold back the sobs.

This is all her fault. 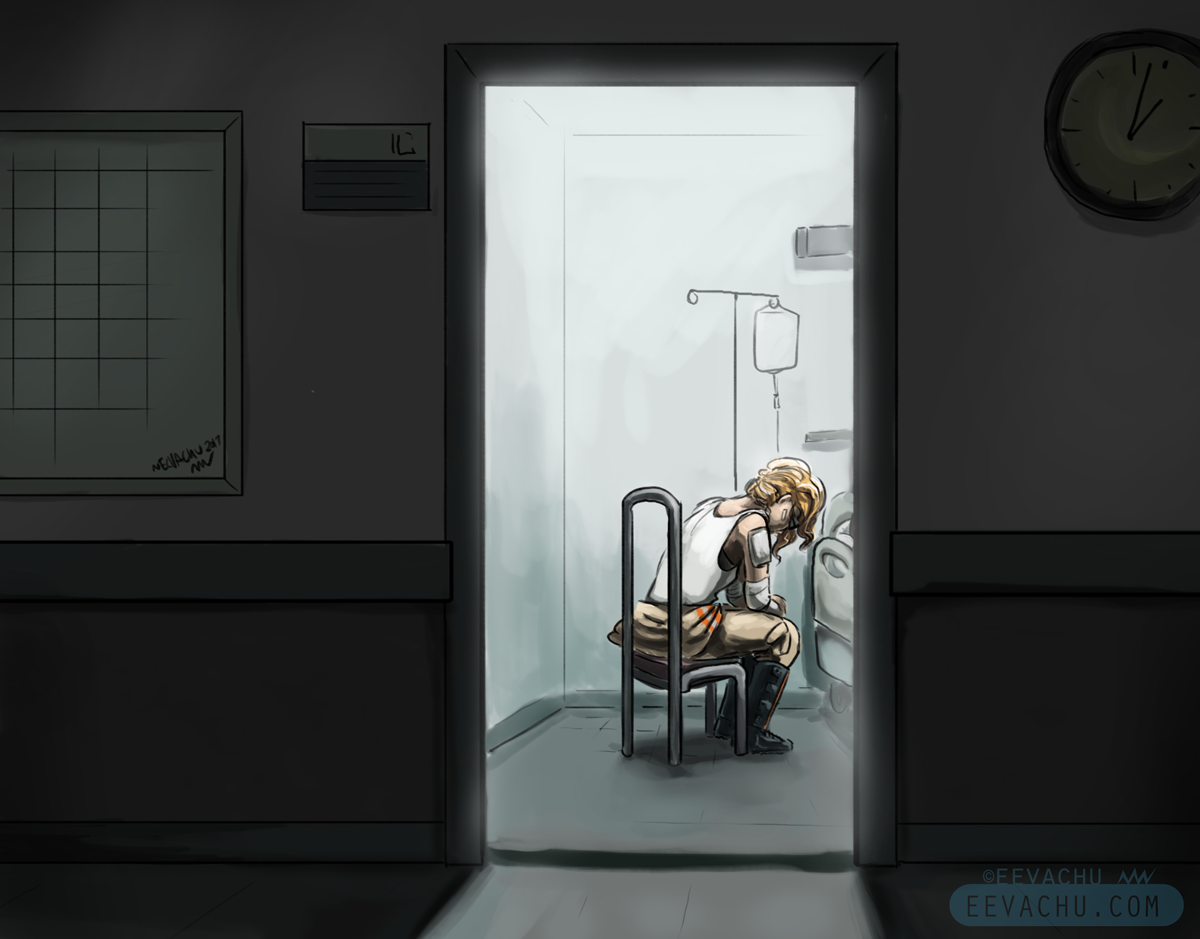