Y’all, I really want to design and sell these shirts just so I can have them. lol

Erin stares blankly at the contraption that is set up in the middle of their shared lab.  Holtz is puttering around it in absolute delight, humming to herself.

Holtz looks up and smiles, “Darling, that is my screen-printing studio.”

She bounds away to a pile of stuff on a table.

“Why do you have a screen-printing studio?” Erin tries to look over her girlfriend’s shoulder as she rummages in a large tupperware container of some sort.

“Braaaandiiiing!” Holtz sing songs as she spins dramatically, a tshirt emblazoned with the Ghostbusters logo in her hands.  Erin looks from the shirt to the container, which is evidently filled with shirts of the same type.

Holtz continues, “But that’s not the best part, I made special ones for all of us.”

“Patty, Abby, Kevin!  I need to show you a thing,” she yells downstairs.

The rest of the Ghostbusters present themselves, Abby and Patty as confused as Kevin is perpetually.  Holtz grabs a handful of shirts from off the table and hands one to each of them.

Patty holds her’s up, it has a ghost and the words: “Smarty-phants! Like phantom and because Patty is the smartest,” Holtz explains.

“Glad to see my natural brilliance is acknowledged,” Patty remarks as she looks over her shirt.

Abby inspects her shirt.  It has the word SOUPERNATURAL across the chest with a container of broth and 6 levitating wontons hovering around it.

Abby laughs, “Aw, you even got the soup to wonton ratio right!”

Kevin already has his on and is grinning madly.  His shirt has his hot dog over a house design on it, but with a Ghostbusters crossed out red circle behind it.  Kevin puffs out his chest with pride.  Erin’s mouth goes a little dry.

Holtz snaps her finger in front of her girlfriend’s face, “Hey, none of that while I’m right here, you’re making me wanna go lift weights.”

Erin gives her girlfriend a once-over and slips off into muscled Holtz fantasy land for a moment.  She swallows.

Holtz presents her shirt proudly proclaiming, “And for you, my dearest: the t-shirt you deserve.”

Erin looks down at a baseball style shirt with their Ghostbusters logo on it, but with Alpha Ghost Girl across the crossed out line in the centre.

“And it matches mine,” chuckles Holtz.

She pulls off the paint splattered sweater she’s wearing to reveal a tank top with a version of their logo with Kevin’s lady ghost and the words Ghost Tits over the red line across the middle in the same style as Erin’s shirt.  Kevin gasps in delight and the rest of the team laugh. 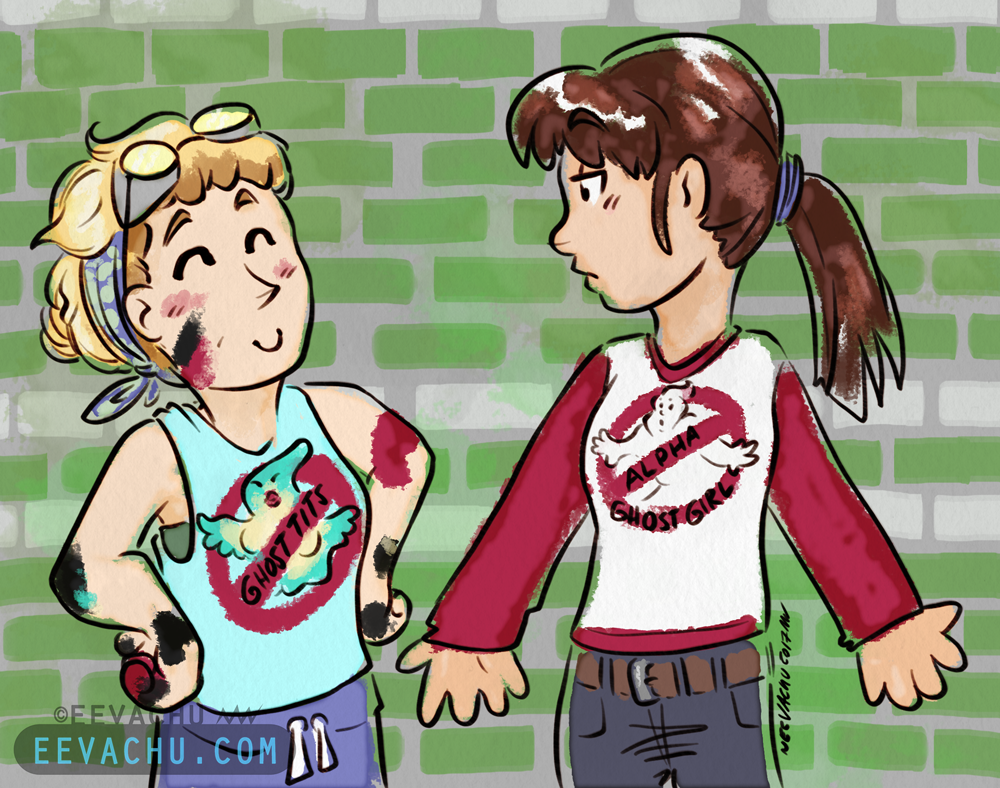 Holtz rubs the back of her neck nervously, “I just thought it’d be nice, since it’s our six month anniversary of being Ghostbusters. Officially.”

The rest of the team agrees.

Holtz grins from ear to ear.