It occurs to me now that I should have written and drawn smut on hump day.  Ah well, there’s always next year.  This is a continuation of the smutty April Fools prompt anyways, so I guess go read that one for hump day.  You don’t have to, in order to understand this one tho, they work as standalones.  Just some uh… supplemental reading. ;>

We’re halfway there!  Ahhh! I love everything everyone has created so far.  It’s been such a rewarding experience organizing this?  We should do this again sometime.

She is not a particularly patient woman, but especially so when it comes to presents of any sort.  When she was a kid, Christmas presents had to be hidden at relatives’ houses, otherwise they’d be carefully dissected and reassembled before any parent was the wiser.  So, when it came to her birthday and presents from her friends, she’d of course already found and opened them all.  Abby knew just to leave it out and get her gifts like tickets to special exhibits at the museum, so at least she couldn’t use it until after her birthday.  Patty and Kevin didn’t stand a chance. (Not that they knew this yet.)

To Holtz’ frustration, however, Erin was warned by Abby about her gift-sleuthing.  Holtz also finds that her girlfriend is an incredibly patient and secretive woman.

“Holtz, my parents didn’t know I was bi until after gay marriage was legal. And boy, did I made out with a lot of girls in their house,” Erin laughs, “so you’re certainly not going to find out what your gift is before you get it.”

“Babe, what are you doing?”

“Building a box,” Erin answers without looking up.  She’s stolen Holtz’ soldering iron and several scraps of metal and is constructing a crude looking cube.  Holtz doesn’t mind, she’s stolen enough of Erin’s toothpaste to make up for it.

“I knew you’d say that.  Maybe I’ll give you a hint if you finally go do your dishes.”

Holtz laughs, “Hints are for dudes.”

She slams the door to the cabinet with more force than is strictly necessary.  Still nothing.

“Maybe if you cleaned your mess once in a while, you might find what you’re looking for,” quips Erin from the couch behind her.  She’s leisurely reading a scientific journal and being patently smug.

Erin sticks her tongue out at her, “Pack rat.”

Then something in her brain clicks and Holtz is off like a shot to the kitchen.  Of course!  It’s the only place she hasn’t looked: the pile of dirty dishes she had been avoiding doing all week.  She pushes aside the top layer of grimy pots, and there, buried under plates and cutlery, is the metal box.

“Oh haha Erin, you’ve made your point,” Holtz calls and she pulls it out. She grabs a butter knife and wrenches it open.

Inside the box is nothing, save for a tiny fish-shaped piece of red paper.

It takes her a moment, but when Holtz realizes she gasps, “A red herring!  That brilliant woman!”

“Thank you and I told you that you wouldn’t find your gift.”

Holtz turns to find Erin, arms crossed and leaning casually on the frame of the kitchen door.  She’s smiling like the cat that ate the canary.  Holtz knows when she’s beaten, but she doesn’t really mind when it’s Erin doing the beating.

Abby’s present is a promissory night out on the town that is fulfilled the night before her birthday.  At 6pm, Patty and Kevin are dragged along to Holtz’ favourite karaoke bar.  Erin has to stay back to work, but promises to join them after she finishes up an article she needs to submit by tonight.

They’re about three shots and two songs in when Holtz confesses, “I think I’m in love with Erin.”

Abby ruffles her hair, “That’s big for you two.”

“Maybe, ‘though you never know with her,” Abby smiles like she has a juicy secret.  Holtz is one too many drinks in to unpack that.

Suddenly, Holtz can feel her phone buzzing in her pocket as Kevin’s fantastic rendition of Britney Spears’ “Toxic” makes it too loud to hear her phone.  She looks down at the name and laughs.  As if summoned, Erin is calling her.

“Holtz I think there’s a leak in the containment unit.”

Holtz bolts out of the bar without a second thought.

She makes it back to the firehouse in record time.  She actually has no idea how she did it.

“Is everything okay? What… Broke…” Holtz trails off as she reaches the top of the stairs and she sees what has become of her lab.

She was expecting chaos, and she gets chaos, but it’s a chaos of streamers, balloons and a banner that reads-

“Happy Birthday,” Erin sings as she seemingly appears from out of thin air.  She places a yellow and white striped birthday hat on Holtz’ head.  Holtz stares at her, wide-eyed and smiling.

Erin holds up a finger, indicating Holtz should wait. It’s as Erin produces a remote from her pocket that Holtz notices Erin is wearing a pair of her goggles.

Erin presses a button on the remote and there’s two medium poofs from above them.  Holtz looks up to see confetti falling from the ceiling.  She squeals in delight between Erin and the falling confetti. 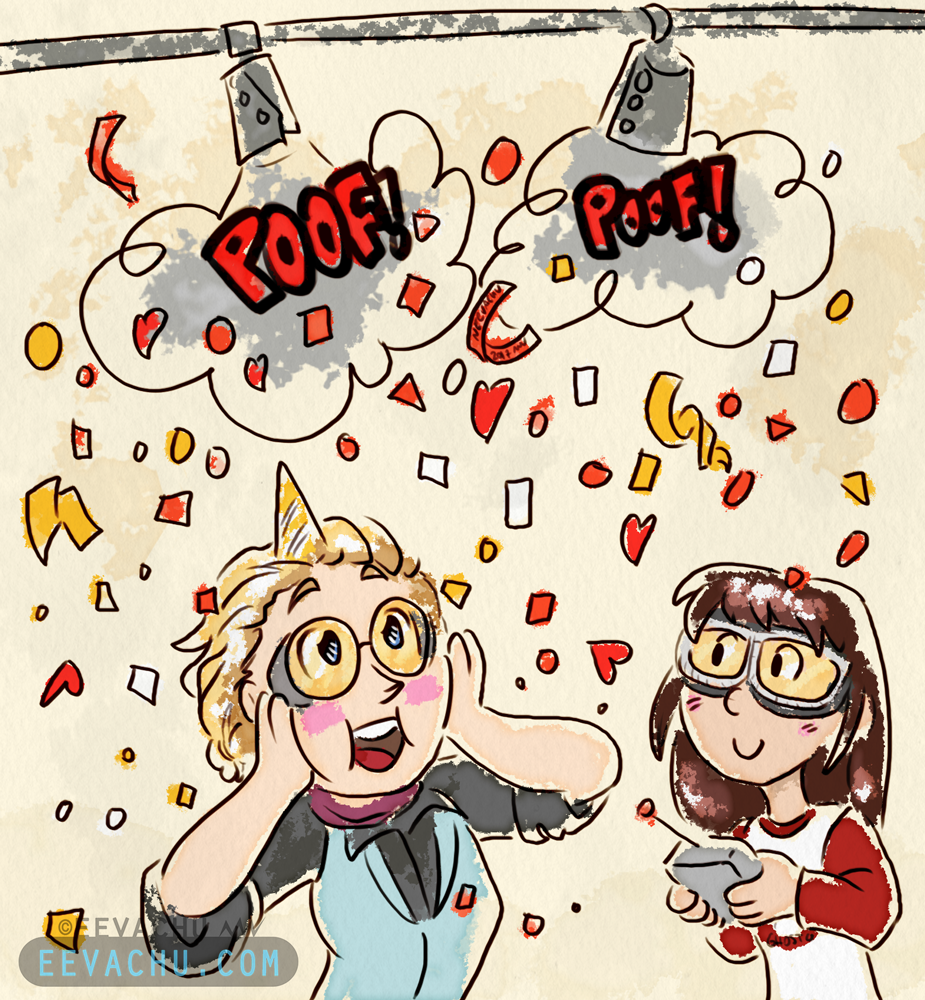 “How did you do all this?”  Holtz asks as she bats at the falling confetti.  She catches a heart shaped one and holds it in her palm.

Erin pulls off her goggles and sits down at her desk, which now has a tablecloth on it.

“I used your ceiling slime rig from April Fools, it works pretty well with confetti.  I hid everything in plain sight, that banner has just been folded on my desk right where you could see it.  I figured you’d find any physical present I got you, based on what Abby’s told me, so I got you an experience. And some poofs.  If that’s okay?” Erin explains, Holtz can hear a bit of nervousness in her voice.

“And now that it’s midnight,” Erin trails off as she reaches under the cloth covering her desk, producing a giant cupcake with candles, and one of Holtz’ torches.  She flicks the torch on and lights the candles.

“Make a wish,” Erin says as she holds the cupcake up to Holtz.

Without hesitation, Holtz leans in and blows out the candles.

She asks the only thing that comes to mind, “What flavour is it?”

“Oh my god!  I love you,” Holtz says before she can stop herself.

Erin stills and stares at Holtz, completely dumbstruck.  Holtz feels like her heart is lodged in her trachea.  She’s overstepped. She’s ruined everything.  She’s-

Then Holtz is leaning across the table and kissing Erin and it’s perfect. 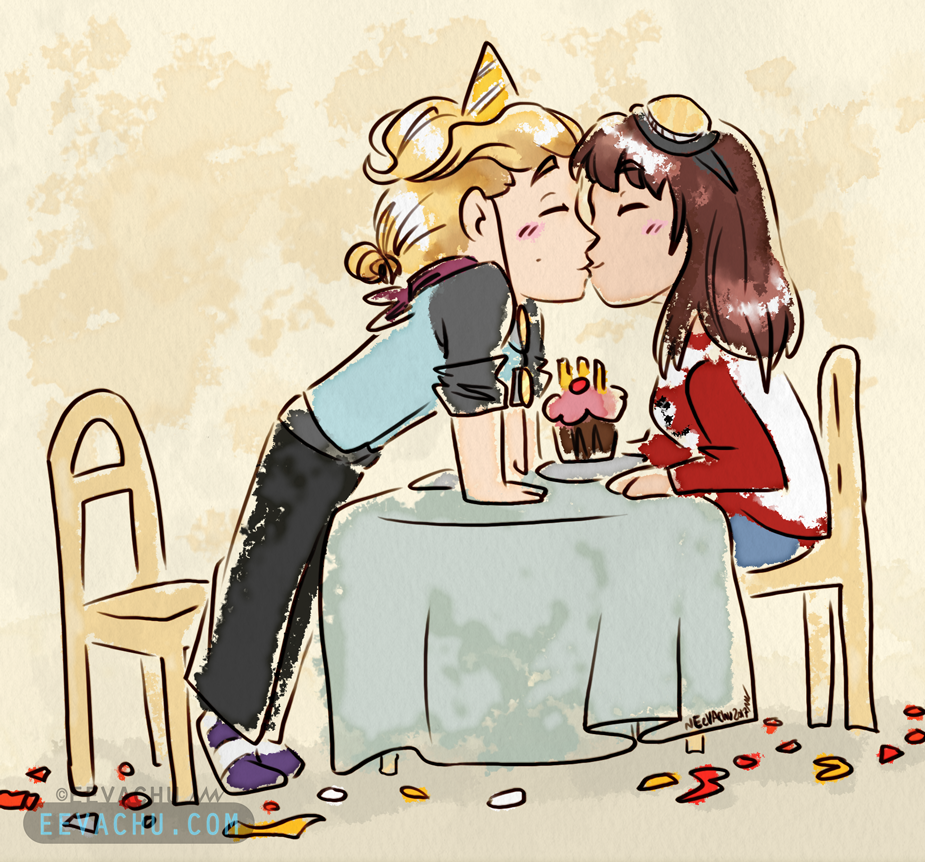 Holtz laughs as she pulls away.

“What?” Erin quirks an eyebrow, a goofy grin on her face.

“That’s the first time one of my birthday wishes has ever came true.”