I’m really happy with how the illustration for this one turned out.  I do my best work completely exhausted.  It’s how I animated a film that one time.  And how I worked on the 3D version of Ghostbusters that other time.  And how I seem to be constantly lately.  Hm.  I’m sensing a pattern.

“No, she’s not! I’m the hot blonde one!” Kevin whines into the phone before slamming into back into the receiver.

Where they ‘gotta go’ is to Pride, hence why Kevin is in the tightest and brightest outfit he owns, and why Abby has a t-shirt cannon and a box of Ghostbusters t-shirts. It really hadn’t taken much to get them to take the day off and be in a parade. However, the Ghostbusters hotline doesn’t stop ringing for parades, apparently.

“Girls keep calling the hotline for ‘the hot blonde one’ and I say, ‘you’re speaking to him,’ but then they say they want to talk to Holtzmann,” Kevin says as he crosses his arms and pouts.  Holtz chooses that moment to waltz in, she’s decked out in her Pride best including a rainbow bandana and matching rainbow tights. She pats Kevin on the back, sympathetically.

Holtz snickers, “Let it go, buddy. The girls all love me, or so my fan pages inform me. That means I’m the supreme hot blonde one, right Erin?”

Erin, who had been trying not to look at any hot blondes in tight pants by poorly pretending to read a scientific journal, startles like a deer and splutters, “What?! No! I mean- Holtz, why do you get all the attention?”

“Have you seen me?” Holtz gestures to all of herself.

Erin turns absolutely crimson and mutters into her journal, “Whatever.”

Holtz saunters over to Erin and sits down in her lap.

“Awww you jealous, baby?” She croons.

“I’ll-be-in-the-car!” Erin yelps as she wriggles out from under Holtz and flees the scene with an ever-darkening blush.

She bumps into Patty on the way out.  Patty shoots Holtz a look, “What’d you do to her now?”

“Could you be any less obvious?” Abby scolds.

“I have no idea what you mean,” grins Holtz.

They make it to the parade without much more incidence, until Kevin goes rogue.

The screams in reaction are deafening.

“Kevin! Put your shirt back on, man!” Screams Patty.

The parade is in full force when Kevin decides to assert his hot blonde dominance. Patty is driving the Ecto 1.5, which is strewn in about a thirty pounds of rainbow streamers. The others are walking beside it. Abby is pulling shirts out of the passenger’s side of the car and shooting them from the cannon into the crowd.

And now Kevin is shirtless and it’s homosexual bedlam.

“No! I need to show everyone that I’m the hotter blonde,” Kevin replies and flexes to emphasize his point. The shouts of undying love and inappropriate offers swell.

“That’s the spirit, Kev!” Encourages Holtz, but it’s not like she’s going to be beaten. So Holtz counters Kevin’s opener by whipping off her shirt and clambering up onto the roof of the Ecto 1.5.

Abby is unfazed. Patty is annoyed. Erin is mortified.

“Holtzmann! Get down from there!” She calls up to Holtz, who may have just caught some girl’s panties out of midair.

“Want a piece, Gilbert? Then come and get it,” Holtz taunts as she gyrates her hips. The crowd loses it again at the motion. Holtz waves at her adoring public, not looking away from Erin.

Erin jumps up onto the Ecto 1.5 with Holtz and stares her down.

“That’s it! I’m tired of you flirting with me and then getting all this attention from girls and then doing… this shit!” Erin yells and pokes Holtz in the chest to emphasize her point.

Holtz sneers, “Well, what are you gonna do about it, babe?”

Erin roughly grabs the rainbow bandanna around Holtz’s neck and crashes her lips against Holtz’. 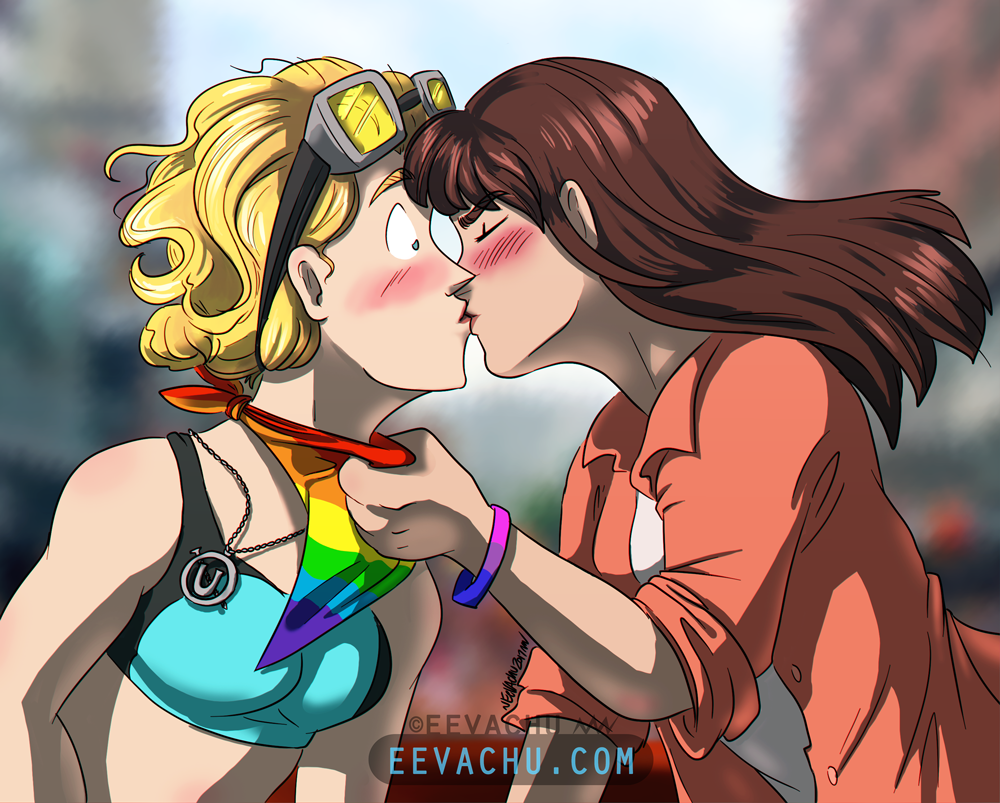 Holtz is caught off guard only for a moment, before she grabs Erin by the ass and pulls her flush against herself. They don’t hear the silence before the simultaneous cheers and groans of broken lady-hearts, being too caught up in their own little world.

It takes a hard squeeze from Holtz’ hands on her behind to shake Erin back to reality. When Erin realizes what she’s just done, she pulls back in horror.

“Holtz I-” Erin starts to apologize, but doesn’t get to finish as Holtz’ lips are back on hers.

The shrieks reach an absolute cacophonous level, and Abby and Patty are yelling at everyone to keep it PG for fuck’s sake, but Holtz and Erin are too wrapped up in each other to notice.

Holtz breaks away and rests her forehead on Erin’s. She sighs, “I was starting to think you’d never make a move.”

“Shut up and keep kissing me, hot blonde one,” Erin commands and Holtz eagerly complies.

“No fair! I don’t have someone to make out with!” Kevin yells.

Luckily for Kevin, after the parade, boys start calling for “the hot blonde one” and they certainly don’t mean Holtzmann. She’s taken now anyways.